You are here: Home / Travel / Take a Photo of Isabella, She is better to look at! :)
Spread the love 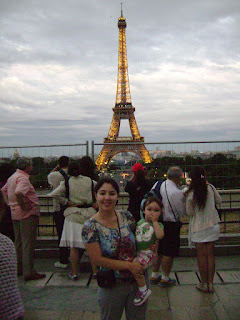 On Tuesday we woke up with a plan. We were going to the Arc de Triomphe in the morning first thing and we then planned to go to the top of the Eiffel Tower. When we arrived we found out much to our dismay that the Arc was closed for the day. It was a holiday – Bastille Day. We were wondering why there was almost no cafes open and the subways were quite empty. After walking around for a little while down by the Arc we were off to the Eiffel Tower. The line was long and we needed to both use the restroom and when we went to the line we found out that it was closed for the day! If only we had just got in line and took turns using the toilet. We were bummed to say the least. They closed early because they were setting up for a concert and fireworks later that evening.

Since Wednesday would be our last day, we knew we would have to wake up early so we could go to the top of the Eiffel. After a long day of walking, walking, walking, and riding in disgustingly hot subways, the last thing you want to do is to get up early. (I must add here that Parisians do not smell so good. All that expensive perfume but lots of body odor!) But it is the Eiffel. So we arrived 15 minutes after it opened on Wednesday morning. One line was LONG, and the other was quite short. In our ignorant excitement we went to the short line. I did notice a sign that said no strollers allowed, but didn’t think anything of it – until we paid and entered the base of the Eiffel. Yep, we were not going up a nice big elevator, we were walking up stairs! The actual count of stairs includes 9 steps to the ticket booth at the base, 328 steps to the first level, 340 steps to the second level and 18 steps to the lift platform on the second level. But it felt like 1 million. Especially after walking so much the last two days. I stopped so many times. Tyler had the backpack and Isabella; I had the stroller. She walked a majority of the stairs as well. So she can brag when she gets older that when she was 18 months old she walked the Eiffel! 😉 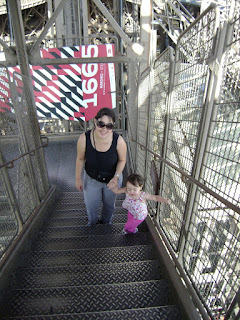 Once we arrived to the observation level we were pleased. It was beautiful. That level is enclosed in metal bars you can see through and take pictures through, so Isabella stood up on the arm rests and looked down below on all the beauty of the Louvre, the Seine, Notre Dame, many old buildings and churches and so much more. As we took in the beauty, the other tourists around us were exclaiming how cute Isabella was. A couple people even took pictures of our Princess! It was quite funny.Tyler liked that we were at the top of the Eiffel Tower and people were taking pictures of Isabella. 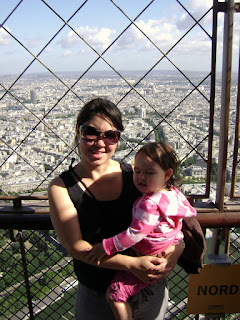 Luckily, we were able to take the elevator to the very top. They don’t let you walk up to that level. Then we made sure to take the elevator down to the bottom. My legs were sore and shaky as it was. I knew I would be sore the next day. It was worth it though. We even saved money taking the stairs, and you know me, I love to be frugal.