You are here: Home / Travel / There Ain’t No Monkeys In My Family Tree
Spread the love 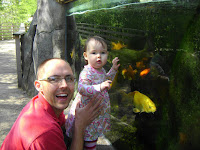 On Friday, we took Isabella to the Sacramento Zoo. We had not been there since she was about four months old. {On Fridays in March the zoo is half price, which is a great deal for us!}

Plus, the Sacramento Zoo is only 14.5 acres – which is small. It only took us 1 hour to go through the entire zoo. Because it is so small they cannot have elephants, which we really wanted her to see. My Princess loves making elephant sounds.

So, Isabella’s favorite animals to look at that day were the monkeys. The chimpanzees were wrestling around (mating actually), and the orangutan was picking his nose and eating it. Isabella liked both of those things, of course.

We had a fun day, and we will try to make it back soon. This next time we may just get a season pass to save money. It is cheap entertainment and we can bring our own lunch. The season’s pass will give us 1/2 price entry into many zoos across the country.

On the way home she was so tired. Daddy had to take a picture of her, with her little elbow up, sleeping. 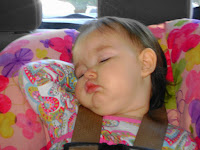